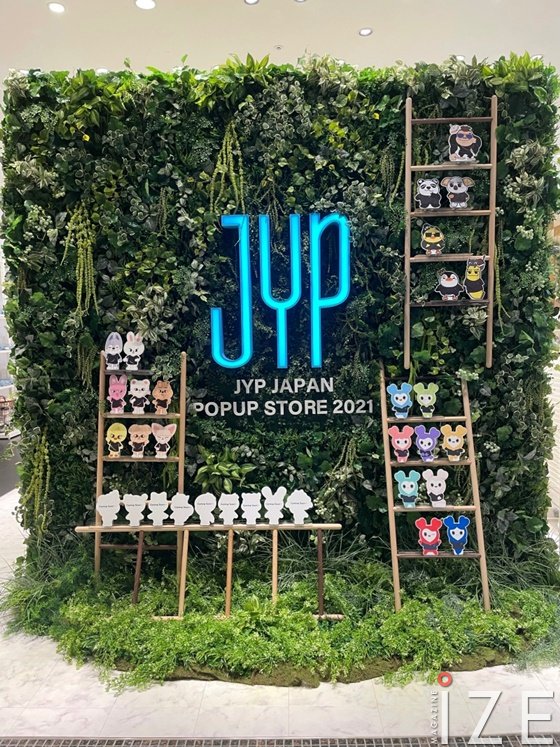 JYP will open a limited-time pop-up store in Kirarito Ginza, Tokyo, Japan from July 3 to August 31 and invite local fans. This is JYP's first pop-up store in about two years since Twice introduced a limited-time pop-up store with a Hawaii-themed concept in 2019, and it is getting a hot response.
This pop-up store features wood and green interiors and was created as a healing space reminiscent of nature in the city. With MDs and goods made with the JYP logo and other artists including 2PM, Twice, Stray Kids, ITZY, and NiziU will be sold together.

In particular, '2PM 10th Anniversary in JAPAN Special Gallery', an exhibition commemorating the 10th anniversary of 2PM's debut in Japan, is also prepared in one space to double the fun. At the pop-up cafe, visitors can enjoy foods with each artist's logo, and the costumes worn by Twice and NiziU are also on display for each period.
The pop-up store will be divided into the 1st (July 3~August 6) and the 2nd (August 7~31) and is operated by 100% reservation system in advance. Fan club can apply separately from the general application period.

Meanwhile, JYP recently opened the JYP Japan online store. Artists' MDs, including MDs made with the JYP logo, are also planned to be continuously displayed and can be purchased locally as well as worldwide.
Written by Gong Mina
Translated by Lee So Yun