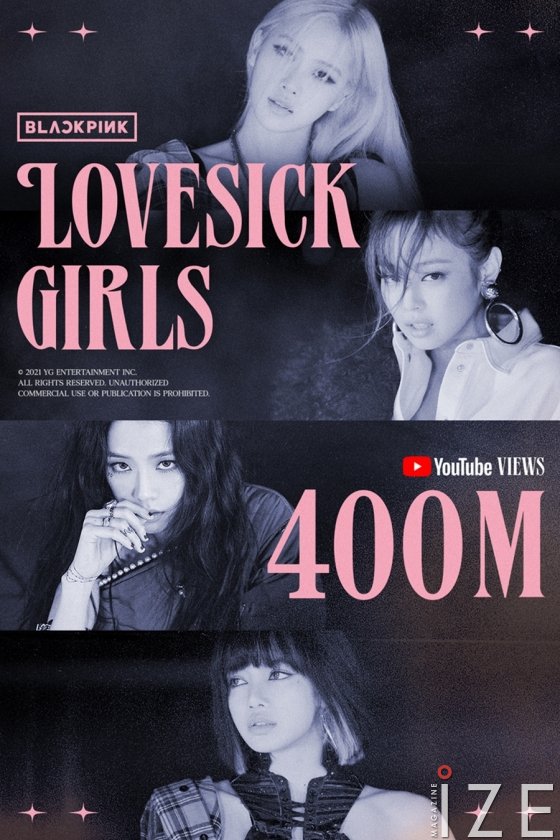 According to YG Entertainment on the 19th, the music video for 'Lovesick Girls' exceeded 400 million views on YouTube as of 11:55 am today. It has been about 199 days since it was released on October 2, 2020.

Blackpink has a total of 11 'Over Hudred Million Views' MV and this is forth MV that reached 400 Million which is the record for K-pop girl groups.

The music video for 'Lovesick Girls' was well received for showing off the mature inner acting of Black Pink members, unlike existing works that were popular for their intense performance-oriented composition and directing. As soon as it was released, it recorded explosive views and reached 100 million views in 75 hours, as well as being ranked #1 on YouTube most watched videos in a week at the time.
'Lovesick Girls' also achieved remarkable achievements on major global charts. This song reached the top of the 'Global YouTube Song Top 100' for two consecutive weeks, ranked 3rd on the Spotify Global Chart, and then entered 59th in the US 'Billboard Hot 100', drawing attention in the mainstream pop market.
'THE ALBUM' containing this song reached #1 on the iTunes album charts in 57 countries including the United States. The album sold more than 1.2 million copies, and Black Pink became the first million seller in a K-pop girl group.
Meanwhile, the number of Black Pink's YouTube subscribers has increased sharply, currently over 60.1 million. The new history that Black Pink will write is soon as it is closely following Justin Bieber, the world's No. 1 female artist, beyond the first, best, and most titles.