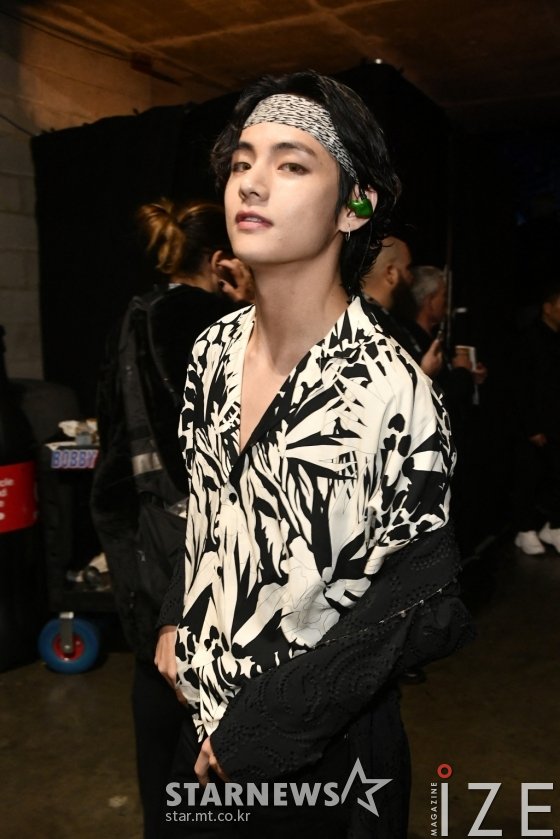 BTS' V is drawing attention as a 'Record Maker', standing shoulder to shoulder with world-class pop stars.
The Portuguese entertainment magazine Tracklist recently published an article titled "V, Nicki Minaj, Ariana Grande, The Killers: 4 Breaking Records", highlighting the records made by top artists in 2021.
The record set by V's own song 'Sweet Night' was also illuminated, reaffirming his reputation as a 'Record Maker'.
According to the record set by V, "V is the first artist to have a song that has reached No. 1 on iTunes in 118 countries. This is a fear by the first and youngest solo artist.
'Sweet Night', which V participated everything from producing to lyrics, composing, and singing, proved V's powerful sound source by breaking numerous records right after the release of the sound source.
At the time of its release, V became the first K-pop solo artist to be ranked No. 1 on the chart with a song released in Korea, while simultaneously dominating the top song charts on iTunes in the U.S. and U.K. as well as iTunes in Japan.
'Sweet Night' was ranked 5th and 8th on the Oricon Daily Chart in the first and second weeks of release, respectively, and this is the highest record for a K-pop solo artist among Korean released music sources in Japan.
Korea's largest music platform 'Melon' also recorded the first place in OST and 2020 solo artist after the chart aggregation reorganization.
In China's largest music platform, 'QQ Music','New Song Chart' and 'Korean Weekly Song Chart' also swept first, dominating all the world's top ten music markets, including the United States, Japan, and the United Kingdom.
Written by Mun Wan Sik
Translated by Lee So Yun
- Any copying, republication or redistribution of STARNEWS’s content is expressly prohibited without prior consent of STARNEWS. Copyright infringement is subject to criminal and civil penalties.