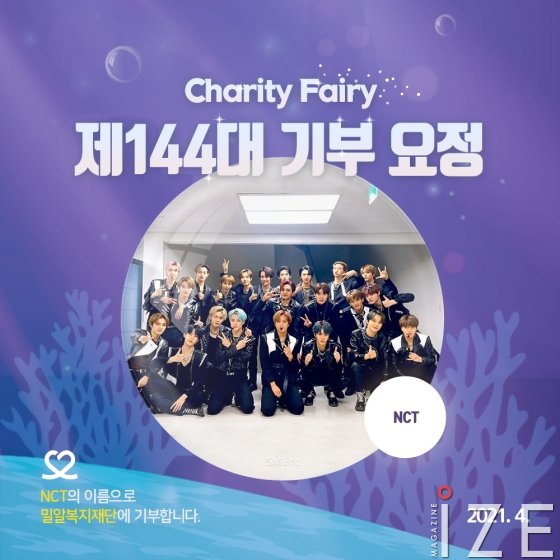 Idol group NCT received 58,21,3,519 votes from Choi Ae-dol, the idol ranking service, and was named as the 144th Donation Fairy.
On the 9th, which was the 5th anniversary of NCT's debut, the fan club NCTzen gathered together early. NCT proved its global popularity by reaching the donation fairy cut line of 55,5555,555 votes in one day after voting began.
Choi Ae-dol selects and donates when any group / artist achieves 1st place by converting the cumulative ranking over the last 30 days, and when achieving 55,555,000 or more votes on various anniversaries.

In March, NCT member Renjun was selected as the 133rd donation fairy on his birthday, but this is the first time for the group to be selected as a donation fairy as a group. NCT achieved a cumulative donation of 500,000 won through the selection of this donation fairy. Donations to be delivered to the Milal Welfare Foundation in the name of NCT are used as medical expenses for low-income disabled infants. The total cumulative donation amount of Choi Ae-dol is 219 million won.
On the other hand, the NCT unit NCT DREAM was released on the 1st lineup of the 2021 Busan One Asia Festival (2021 BOF) on May 8, and fans' interest is growing.
Written by Yoon Sang Geun
Translated by Lee So Yun