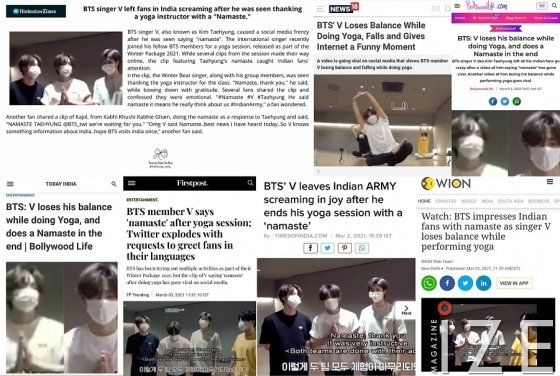 The greeting from BTS V is getting a lot of attention and is receiving enthusiastic support from Indian fans.
The famous Indian media 'Hindustan Times' said, "BTS V was caught talking about 'Namaste' and got the attention of Indian fans. V was saying Namaste to a yoga instructor.
“The way he conveyed was swept through SNS in India.”the paper said.
Local media such as Today India, WIONnews, timesofindia Bollywoodlife.com, firstpost, freepress, ABPNews, and news18 also delivered videos of V expressing gratitude as 'Namaste'.

V has impressed fans by preparing a comment in the language of the country every time during his overseas tour. In particular, poetic expressions containing V's sincerity are being talked about, leaving a deep lingering lingering over language.

After V's performance in Paris, V's ending "Je t'aime plus qu'hier mais moins que demain. Merci" (I love you more than yesterday and less than tomorrow) gives fans all over the world a blissful impression, and is a representative V's quote.