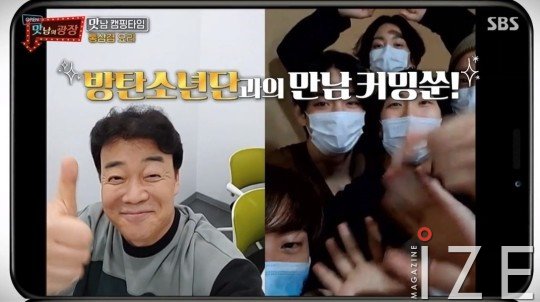 Korea's famous chef and entrepreneur Baek Jong-won meets BTS (RM Jin Suga J-Hope Jimin V Jungkook) and the group apprears in 'Delicious Rendezvous'.
Baek Jong-won had a conversation with BTS through a video call at SBS 'Delicious Rendezvous'broadcast on the 14th. In the call, Baek Jong-won suggested that he cooks himself once, and the members replied.He then announced their appearance, saying,'Coming Soon to Meet BTS'.
With this, a collab broadcast of 'Delicious Rendezvous' and 'Run BTS' self-produced content 'Run Bangtan' was completed.
The attention is now focused on the format in which their encounter will be drawn.
Written by Lee Jung Ho
Translated by Lee So Yun