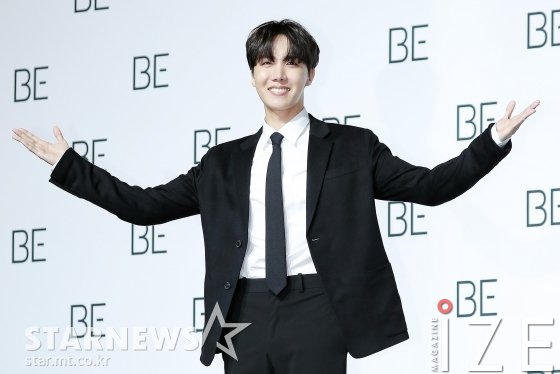 J-Hope was on the topic of the overseas radio.
On December 28, the program Club Weekend of the Tunisian radio channel Mosaïque FM invited members of the local J-Hope fan club in Tunisia to the studio for an interview.
In city of Gwangju, the hometown of J-Hope, as part of the “K-Pop Star Street” project, a sculpture containing the messages of support from BTS fans is being created.
The sculpture is in the form of letters in English from J-Hope's mixtape (non-regular free album) 'HOPE WORLD' and is made with the participation of fans around the world. Mosaic FM prepared a time to listen to the news in detail.
The host of the program asked 'why the sculpture was made and how it could be completed'. Fans answered that “J-Hope is a member of the group BTS who was nominated for Grammy. He has really tried his best. In order to commend these efforts and celebrate his success, his hometown Gwangju created a sculpture with 'K-Pop Art School'. 21,800 messages of support collected from all over the world are engraved on the sculpture. The fan clubs translated and promoted the messages in each language to collect messages.”
The host showed great interest in whether the sculpture included Tunisia and whether it was possible to see Arabic characters. In response, fans said, “You can see the country of Tunisia in the letter P. Fans around the world sent messages in various languages ​​as well as Korean and English. You can also read Arabic.”
Fans say, “ARMY is the name of the BTS fandom, meaning “Adorable Representative M.C for Youth”. Until now, BTS fans have been commonly referred to as ARMY regardless of country. However, in this sculpture, not only the country but also the name is specifically engraved. I think this has a special meaning.”

Mosaic FM is the first private radio station in Tunisia and is a popular channel with high listening rates.
Fans showed their true fan spirit by promoting J-Hope's birthday, which is February 18, and the news that Spotify's 5 million followers were imminent.
Written by Kim Su Jin
Translated by Lee So Yun