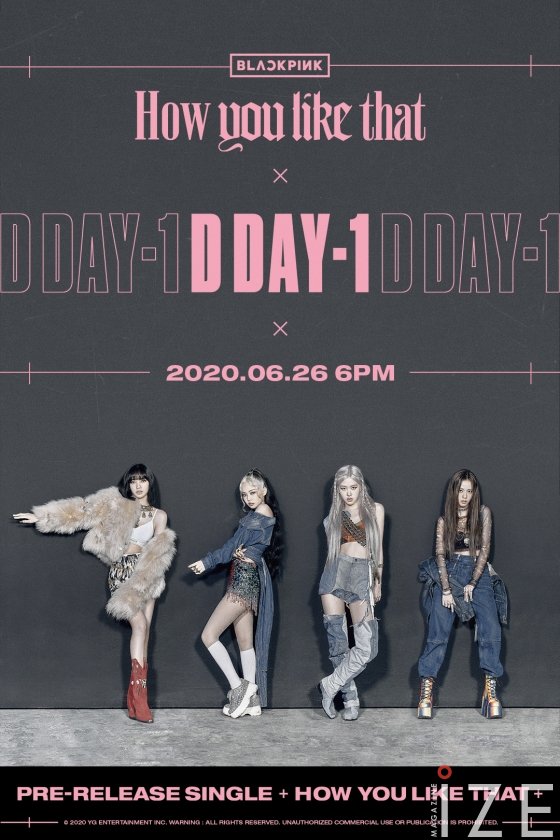 The expectation of music fans around the world peaks as the comeback of the girl group BlackPink approached just one day ahead.

Affiliated company YG Entertainment posted Black Pink pre-release title 'How You Like That' D-1 poster on the 25th at 9:00 am.

BlackPink's charismatic atmosphere is the highlighted. Four members each wear a street punk look with fur, western-style boots, and glitter garments and accessories.
The overall harmony showed synergy close to perfection.
The music video teaser for 'How You Like That' recorded more than 10 million views on YouTube less than a day after it was released on the 24th. The same was true for individual teaser videos by members. This is a very short amount of teasing content, which is unusual and proves the hot interest of fans around the world.
'How You Like That' melody that took off the veil through the music video teaser caught the ears of music fans at once. The dreamy and magnificent orchestra sound infused tension, and the mysterious and colorful visuals that reminded me of the ancient temple doubled my curiosity about this music video.
Fans of Lady Gaga volunteered to link "How You Like That" music video teaser to their SNS account and said, "We are very excited to support BlackPink and Blink. We will be stronger when we unite." Also, on the fan site of Lady Gaga, photos of Black Pink members and free events to promote new songs continued.

BlackPink will open 'Countdown Live' on V Live and YouTube's official channel an hour before 5 pm to communicate with global fans. In addition, they will appear NBC's The Tonight Show Starring Jimmy Fallon)'to perform 'How You Like That'  for the first time to show off and start a full-fledged comeback activity on 26th in local time.
Written by Yoon Sang Geun
Translated by Lee So Yun