BTS Come Back Title Song 'ON' 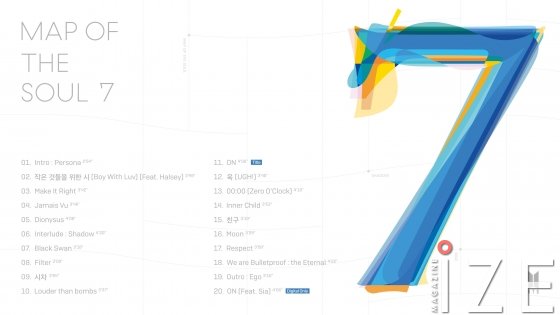 The top idol group BTS will release the comeback album title song 'ON'.
Its label Big Hit Entertainment released track list of its 4th album 'MAP OF THE SOUL: 7' on the official Twitter on February 17th.
According to the track list, the album title song is 'ON' and 'Number', which is featured with Australian singer Sia will only be available in digital version.

In addition, the album contains as many as 20 tracks, including 'Time difference', 'Uk', '00: 00 ',' Inner Child ',' Friends', 'Moon', 'Respect', and 'We are Bulletproof: the Eternal'.
Among them, only 15 new songs were included, as well as songs from previous albums such as Poems for Small Things, Make It Right, and Dionysus.

MAP OF THE SOUL: 7 will be on sale on February 21.
BTS will appear on the US NBC talk show 'TODAY SHOW' on the comeback day, and will be on 'The Tonight Show Starring Jimmy Fallon' on 24th.
BTS will hold a comeback press conference in Korea on the 24th.
Written by Yoon Sang Geun
Translated by Lee So Yun