In the Mnet program Comeback Wars: QUEENDOM (referred to as “Queendom”), 6 female idol groups took to the stage. Depending on the theme in a given challenge, they are asked to reinterpret an opposing team’s song in their own style or reveal a new side of themselves with an existing number. The show highlighted just how important the selection process for the concept and production could be to a K-Pop idol. These girl groups planned their own performance and strategized in regards to their strengths and identity as a group. Here are 5 stage performances from Queendom that particularly stood out in terms of their planning and idea-gathering process, put together regardless of personal preference or ranking. 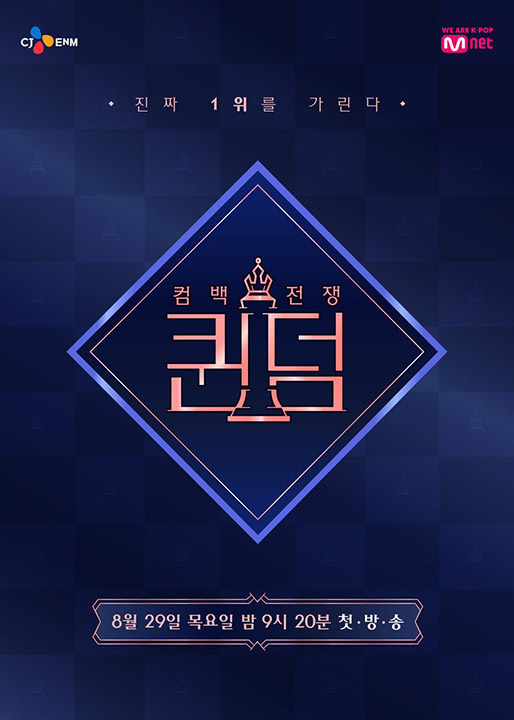 (G)I-DLE “LATATA”
The theme for Mnet Queendom’s preliminary competition was the hit song from each group. Working with a song that the public already knew meant the teams had to try and display their unknown traits rather than what was expected. SOYEON proposed a sorcerer-style remake to “LATATA,” the popular hit song she had mostly led the making and producing of. She suggested recording a narration for the intro in a foreign language to insert chanting, an idea from the horror movie Epitaph, and made MINNIE act it out in Thai as she was the one with the eeriest look. The synchronized choreography in the dance break after verse 1 was replaced with moves visualizing the casting of spells with complex arm angles. The rap part starting verse 2 was switched to SOYEON’s performance bowing down between dancers surrounding her in worship. As new features were brought in for the sake of one consistent concept, “LATATA” transformed from a song enticing a lover to powerful sorcery that captivated the audience.
SOYEON did not insist on keeping “LATATA” as she had written it in the performance. The original version had been closer to a dance song with a steady, repetitive rhythm and melody with a reggae beat. But the remix boldly discarded its distinctive reggae beat and chose a structure that could tell a clear story in the first half of the song. In the dance break or rap part following verse 1, the song took on an impactful twist from its original repetitive vibe. As a result, the vocals of YUQI, with her deep voice, and MIYEON, taking up most of the chorus, really shone through. It was only in the second half of verse 2 with the members coming together in synchronized dance for the climax that the song reached its ending with heightened scale. The song became a medium for storytelling on stage, and the (G)I-DLE members formed a part of it, making the best of the performance as the main characters.
First place was given to (G)I-DLE for their “LATATA” performance, which could not be attributed to the unusual concept alone. SOYEON strategically allocated the team member who possessed the appropriate traits in the key role of introducing the song theme. At the same time, the vocal color and performance of the other members were accounted for. Concentrating sorcery-like features from the end of verse 1 to the beginning of verse 2, she managed to create a memorable performance with her rap skills. This was how she prevented the original synchronized choreography appearing in the latter half of verse 2 from appearing dull. Within the challenging environment of a survival program complete with time constraints, both novel and original factors were utilized effectively. SOYEON knew perfectly well the difference between a show performance and a contest, and took into consideration not only the music and performance, but also the story-telling aspect, and more. It was a moment where SOYEON stood out as a music and stage producer to the wider audience.


(G)I-DLE “Put It Straight”
“Put It Straight” performed by (G)I-DLE was about pressing a lover who had become distant. SOYEON, who has written the song, lyrics, and remix of the song explained it was about a woman who was “crazy sad.” She added that the costume would involve “white clothes but soaked in blood.” The details in the stage composition demonstrated how the features she mentioned were connected with the lyrics. SOYEON began the stage clutching her head in an anguished expression – “Just say no. Just tell me that you don’t love me. Like my heart is going to leave. Like I’m going to hate you.” The police lines on the stage suggested a crime scene, and a man as pale as a corpse had his mouth taped in the shape of an X. The (G)I-DLE members each wore what appeared to be an engagement ring on their fourth fingers, but they were barefoot clad in a “white but soaked in red” dress. It appeared that, for whatever reason, they had killed the person they loved and had been about to marry. And at the end of the performance, SOYEON flipped the intro lyrics in an uncanny and eerie manner – “Just say yes. Yes, keep saying it. Just like the good times. Like you love me now.” The man lying lifeless was now unable to respond to her pressing him for answers. The lyrics that once expressed the pain of losing a loved one’s affection now taunted the person who could not say what they felt anymore. It was a process where the meaning in the lyrics transformed completely through the stage production. It was (G)I-DLE’s very own narrative.
“Put It Straight” was closer to a scene in a drama or musical rather than in a broadcast show. At the start, the members’ voices were incorporated into the narration with minimal sound effects, and lighting effects marked the entrance of each member just like in theatre. The choreography showcased by (G)I-DLE was closer to modern dance rather than general girl group choreography, which was why it was the acting and not the dancing that created the impact on stage. In the scene where all of the members removed their lipstick, SOYEON’s facial expression gained a good amount of attention. And the performance where she went on to rap in desperation was more like an expression of her emotions rather than a dance. She intentionally performed her rap as though she was speaking or shouting. The way the male dancers functioned as stage props as important part of the narrative was also symbolic. Rather than showcase exaggerated movements, they formed the overall atmosphere with eery movements, and ironically attracted more attention playing dead than alive. It created a contrast with the members who were alive yet clearly messed up, emphasizing the storyline within the lyrics of “a woman who is alive and a man who is dead.” By using song and dance simply as a means and rather emphasizing movements and expressions, the presence of each of the members was highlighted delivering more powerful feelings. It was as though the remake and storytelling supplemented the weaknesses in “Put It Straight,” which had been a mini album song without its own choreography.
The theme for the third competition was Pandora’s Box, where the teams had to perform a song picked out by fans. “Put It Straight” was less widespread as it had been released in a mini album, and it would not have been an easy go-to had it not been a fan-based contest. It could very well have been “a song only our fans would know,” as they pointed out at the time of selecting the song. In fact (G)I-DLE’s ranked fourth overall in the third round, the same as the unit battle in the first round. The fact that the votes for this performance did not exceed that of the unit battle rankings could mean the horror concept received a polarized response. Indeed, a performance depicting a woman whose sadnes