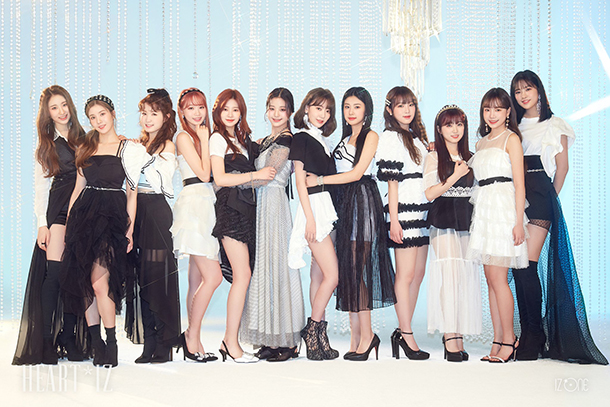 “Cute and pretty. A group that could compete with TWICE.” This is what one online community suggested of IZ*ONE when it made its comeback on the first day of April. Currently IZ*ONE is competing for its place on music charts alongside girl groups like BLACKPINK, MAMAMOO, and ITZY. These earlier groups represent the more recent “girl crush” syndrome, varying from BLACKPINK’s powerful music, or ITZY’s dance performance on all fours, to MAMAMOO’s music video dressed up as men. On the other hand, IZ*ONE’s “Violeta” reminds one of the more traditional girl groups, somewhat like TWICE. The lyrics go “I can feel the scent even when I close my eyes; it’s so gentle I can fall into it,” “I follow the light that has disappeared far away,” “I get closer to you…” It sounds very familiar like one of those love songs, compared to BLACKPINK’s love-slashing “Kill This Love,” which basically pulls the breaks on love: “While I force myself to hide my tears, I need to bring an end to this love.” Nor does IZ*ONE look much different to older girl groups, as they are dressed mostly in pink or yellow pastel tones and one-piece dresses or blouses emphasizing an “innocent” feel. Indeed at first glance, it is not easy to identify what factors would attract girl fans.

On closer inspection, however, IZ*ONE in “Violeta” seems to make use of old girl group features to display a little something different. At times it almost looks paradoxical. For instance rather than chiffon, the fabric of the pastel toned clothes is made of a more rigid and voluptuous organza. Their layered styling gives an aurora-like effect depending on the angle, creating a sense of longing for their beauty but at the same time making each member shine clear and bright. Moreover, IZ*ONE does not attempt any extra cuteness (aegyo) on stage in front of the camera. All they do is smile a little when walking coolly on stage or making an appearance with powerful dance moves. One of the key points in the “Violeta” choreography is the walking of members led by the tallest Jang Wong-young expressing a confident attitude, and the movements displayed when the use ballet applications in their walk or dance create individual lines that accumulate into one large circle. Because the collective circle becomes the main point, there is no need to accentuate a particular dance move by directing attention to a member’s feminine body parts. Arguably they have placed the focus on the general completeness of the choreography rather than the cuteness or sexual appeal as we would often see in the performance of Korean girl groups.
Ahn Yu-jin’s solo dance in the “Violeta” music video is symbolic. Making use of her arms and legs, she freely splashes water from the ground in big and refreshing movements. The water effects whenever she moves, and her silhouette dancing in the dark background, are not designed as a sexy scene but as a demonstration of the strong and dynamic choreography of Violeta’s chorus. The camera depicts Yujin’s full height and delivers the energy of the dance, rather than presenting her body in a sexy manner. Appealing to the strength and confidence of a member’s bodily moves is more commonly found in boy groups. The other members also look straight into the camera in the music video not all smiles. This concept seems to overlap with Chae-yeon’s successful cover dance of male groups on JTBC “Idol Room.” Back to the lyrics on “Violeta,” the “flower” in the song is not an allusion to IZ*ONE. Instead, they say to the other person “You’re my Violeta.” Also in the song “La Vie en Rose,” the rose is a mere vector of passion and ambition: “I will make it shine brighter and redder than anything else,” saying it “makes my heart burn up” and “makes me dance.” Curiously, IZ*ONE evinces no intent to claim they are attractive or prove their charm to anyone. Rather, they say they will turn the other person “brighter and redder” in “La Vie en Rose,” or let them “shine brighter than anybody else” in “Violeta.” It is no coincidence that in the chorus for both songs the members come together with powerful and charismatic moves in perfect sync.

A famous girl group producer, A, once said “All a girl group needs to appeal to the audience is to look pretty.” It points to the fact that it is easier to demand attention with the “pretty” appearance commonly created in the entertainment industry by standards like “aegyo,” “sex appeal,” or “innocence.” This is certainly difficult to deny when considering many of the girl groups that gained popularity so far. Even so, it is clear that IZ*ONE demonstrates yet another change within the girl group market. Notably IZ*ONE made its debut through the Mnet program “PRODUCE 48.” The program received criticism for inducing extreme scenarios among girls, and displaying countless misogynic scenes in the process. However in completing such a process IZ*ONE came out with a song filled with their passion and an onstage performance that was wowed for its completeness rather than other merits like cuteness or sexiness. This way IZ*ONE did not have to promote a “girl crush” concept to incorporate big and bad movements including hair tossing or the like, and could become a team with confident and bright self-expression without wearing military style or sporty clothes, but wearing blouses and skirts.

This is not to suggest a grand scheme behind the producing of the team itself. That would not explain how “PRODUCE 48” came to be in the first place. But IZ*ONE is proving that new standards are being sought for girl groups now. Their album “Heart*IZ” released on the 1st of last month sold 132,109 copies in the first week, snatching the highest ever weekly album sales for girl groups. The female portion of “Violeta” daily users on Melon Music was 54.1% as of the 13th of last month. This was higher than 51.9% for ITZY’s “Dalla Dalla” or 53.3% of MAMAMOO’s “Gogobebe.” Of course there are more factors at play when it comes to listening to music, so one cannot point to it as evidence that IZ*ONE has more female fans, etc. But it would be worthwhile to think about what sort of direction girl groups should aim for in creating an album that people from both sexes can enjoy. It makes one wonder what the standards are for girl groups to appeal to women alike. The discussion would be extensive, but one thing is for sure. That standard is changing little by little, even now.